Our Visit to The Little School of Improbable Cooking 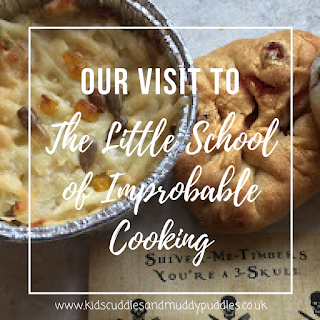 The summer holidays can be an expensive time, full of day trips and activities to keep the kids entertained and the adults sane. This summer however, I'm determined to keep costs low but still have an amazing time with my two children. So, I jumped at the chance to join in with The Little School of Improbable Cooking, hosted by B-Arts (a group of artists and producers based in North Staffordshire), and supported by National Lottery Funding.

From 26th July to 18th August, The Little School of Improbable Cooking is offering free cooking and creative activities for children aged 2 - 12 at libraries across Stoke-on-Trent. We arrived with plenty of time, which is recommended as these are mostly drop in sessions with limited places. Some people took the opportunity to sign up for the free Summer Reading Challenge but we've already signed up so the children browsed the books while we waited.

This year, the cooking school is pirate themed and the team of artists (as they like to be known) turned up in full costume and in character! They explained that the chefs were in trouble because pirates had taken over in a bid to win Master Pirate Chef... and the judge was coming in a few hours! All the children were really enthusiastic to help, so the pirates gave out 'pirate' chefs hats and explained how to find their pirate names. Can you guess what two things they're made up of?!

Then the children were sent off on an ingredient hunt around the library! My two were really excited to find one of the five pots of pirate food hidden on a shelf! The pirates let them look at and smell the ingredients and give them all pirate names! I think the cockles became fish eyeballs and the cucumber yogurt mix was named sea slugs! By now, the budding chefs were a little worried that these were the things they'd be cooking with!
Next we were all taken into a room where the kitchen was. The pirates split us up into 2 groups - 5 and under, and over 5s and our group was sent off to wash their hands first. All the children were given aprons to wear before entering the kitchen, where the pirate chef was waiting for us.

The kids were shown all the ingredients, including sweetcorn, peas, carrots, cooked onions, potatoes, cheese, which they could fill their silver pie cases with. It's funny to watch how different my children are - S filled his with peas, sweetcorn and cheese and R filled hers with anything that would fit! There was a cheese sauce ready prepared to drizzle over the ingredients, then mash, cheese and seeds to put on the top. The kids were really excited to watch them go into the oven, knowing that they had made their own lunch!
There were drinks and fruit and veg snacks ready for the children as they came out of the kitchen and swapped with the other group. One of the pirate artists, Kurly McGeachie (a Writing West Midlands writer - a partner of the project) was ready and waiting to teach the children some beat-boxing and make up a rap together about their pirate experiences! They were all allowed use the microphone and push buttons on the iPad to make the backing track, much to my kids' delight! It was such a great way to keep the children entertained while they waited their turn in the kitchen again to make dessert!

Back in the kitchen, the kids rolled out shortcrust pastry into thin squares and filled them with sweet treats, including strawberries, raisins, rainbow drops, grated chocolate, and marshmallows! They were shown how to gather up the pastry into parcels, and then their pirate treasure bags were brushed with gold and popped into the oven. 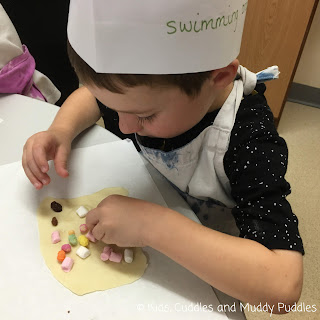 We swapped once more with the other group, and rejoined Kurly the beat-boxing pirate! He had put together the children's ideas from earlier and come up with a catchy little rap to put to the music they had composed on the iPad. It was time to practice! Pirate Kurly led the rap, and the children followed! They picked up the chorus really well and all joined in. R even had a go on the microphone but S was a bit too shy!

By the time they had it perfected, it was time to serve up lunch! The pirates worked hard to get everyone's pies out to them, and the children could choose extras such as pasta and chopped vegetables to add to their plates. Unfortunately S's pie was accidentally taken by someone else to start with, but the friendly pirates managed to avert disaster (as tears welled up in his little eyes) by finding him a spare! All the children sat and ate their self-cooked lunches with pride! 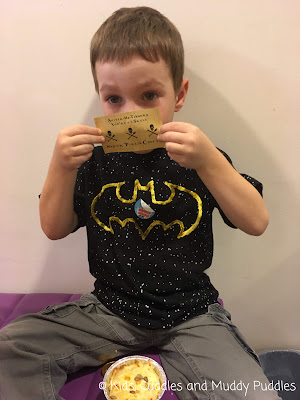 As they sat down to dig in, a wonderfully dressed pirate appeared - it was the Master Pirate Chef judge! She brought with her gold (chocolate) coins and scrolls for everyone! And miraculously, S's original pie appeared! It had been put back on the side untouched, still with his name on! So we got to take that one home to give to Daddy! The beat-boxing pirate led the children in a group rap to finish of the session and then it was time to head home with our little treasure bags to eat later. 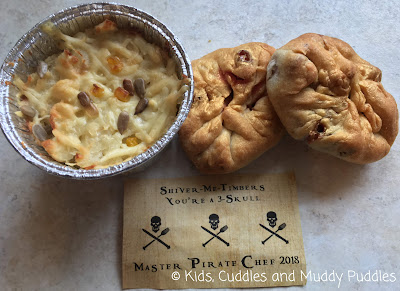 I was so impressed with The Little School of Improbable Cooking and the activities they offered today. I was even more impressed that it was at no cost to us, helping us to continue enjoying our summer on a shoestring! I think it's a fantastic programme, and encourages healthy, hands-on cooking experiences for children. I know my two were so excited and proud to know that they made their own lunch and I think they enjoyed it just that little bit more to know the effort and love that went into making it! What better way to spend two hours of our summer holiday? I wonder what the kids will cook up next...

If you live in or near Stoke-on Trent, I really recommend you try out this activity. You can find the dates, times and venues of their remaining workshops on the website. Pop back and let us know in the comments below if you try it out!

Finding joy in the little things: As some of you may know, I like to end every post (where it fits) with a little note on how the little things brought me joy. It's not about how much money you spend, or the amazing places you visit, but a reminder to be grateful for the little things, to take the time to think about what you really appreciated that week or in that moment and to reflect on what truly matters.

Today I was grateful to live in a city where there are so many great opportunities for our children; where the activities are well resourced, and well run by friendly, enthusiastic people; where the only cost to the parents or carers is spending quality time with the children in their care; where the children were made to feel valued and part of a wider team and community; where the children took pride in their own creations. Well done B-Arts and Stoke-On-Trent, we really enjoyed ourselves!

By Kids, Cuddles and Muddy Puddles - August 02, 2018
Email ThisBlogThis!Share to TwitterShare to FacebookShare to Pinterest
Labels: Activities, Ideal For Children, Libraries, On A Budget, Our Local Area, Parenting, Reviews, School Holidays, Summer Holiday Diaries, Things To Do In Staffordshire