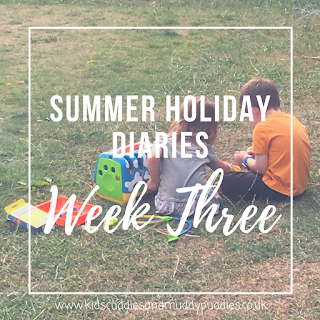 So here we are, at the end of Week 3 of the summer holidays! I know I said it last week but they really are flying by! We are trying our best to have a "summer on a shoestring!" I'm saving money where ever I can by making full use of all the free events in and around Stoke-On-Trent this summer.

So here's what we got up to in the third week of the summer holidays, and how we tried to keep costs down.

R loves her Messy Monday group during term time, and during the holidays they put on a couple of sessions that older siblings can join in with too. So today we went along to their jungle themed session, and as always, it was fabulously resourced with plenty for kids of all ages to do.

S even joined in with the messy stuff which shows how much he has changed in just a short time. He used to hate touching anything wet or sticky, but he threw himself into everything on offer! It only cost £5.50 for all of us for the 2 hour session, including tea, juice, toast and crumpets! An absolute bargain!
The rest of the day was quiet, just playing in the garden and with their vet set! S hurt himself and R was a keen nurse, helping him out by putting a plaster on his knee! It was very sweet to watch!

Tuesday was a pretty chilled out day too, with a trip to playgroup/coffee morning for tea and cake (for a small donation) and a catch up with friends! I caught up with some blogging that afternoon and the children entertained themselves! I am very lucky that my children enjoy each other's company and play so nicely together... most of the time!

Today was the day of the Pirate Adventure at our local library, another free event in their summer programme. It was described as a "journey of movement, music, storytelling and dance!" And it certainly was a mixed bag! We were kind of expecting a show, but it turned out to be more of a "everybody get up and join in" experience!
Despite the pirate getting a bit swamped with little people, he just about managed to keep my kids' attention and they joined in with most things! They were both pleased to be given some "real treasure" (a plastic gold coin) at the end!
We popped into the library afterwards and S got the second part of the Summer Reading Challenge completed. Only one more to go now! We picked up a great little pack of magnetic letters from Lidl on the way home, for £2.99 and the kids spent about an hour playing with them on the fridge-freezer! I love how little it costs to keep them entertained! (It's a shame the puppies chewed a few that were left too low on the freezer door! Oops! Not quite a full set now...!)

Thursday was a lovely day. We met some of S's school friends at one of our favourite places - Tittesworth Reservoir in Meerbrook, on the Peak District border. We spent absolutely ages in the park trying to keep tabs on all 12 (I think!) children! Then we all sat and had our picnic on the grass before the kids posed for a big group photo on a massive chair carved out of wood. We said we will have to try and recreate it for them every year! The day only cost me £3 for parking and another £3 for 2 obligatory ice lollies!
When we got home, we spent the afternoon making cakes - out of a packet! I'm not that adventurous after a whole morning out! The children enjoyed the 'licking the bowl' part the best I think! Don't worry, there were no raw eggs in this mixture!

Unfortunately, a terrible fire took hold of an area of the Roaches, just behind where we'd spent the afternoon. We just missed it actually. It really upsets me to think of the utter devastation caused to one of our favourite beauty spots, and all that wildlife which is now suffering. The fire raged for days and put many firemen and women in danger, including 2 who we know. It's going to take such a long time for that area to recover, if it ever will. Over 200 acres have been affected so far.

My whole family live down south so we don't see them that often. Anyway, my brother, his wife and child decided to come up and visit for the day. They picked the wettest day so we decided to go swimming to keep the children entertained. We ended up at Dimensions Leisure Centre, when S had had his birthday party a few weeks earlier.

The children had a great time in the splash area, the rapids and going on the flume! When everyone was as shriveled as prunes, we got changed and let them loose on the play tower while the adults had a well-earned coffee! This wasn't a really cheap trip out but I managed to keep it to under £25, including a quick stop for lunch before we went swimming. So considering the rest of the week had been quite low cost, I didn't mind at all.

My brother and his family left about 7 pm and it was an early night for my two - and me too!

My son had been lucky enough to be invited to a birthday party at a new place in Stoke-on-Trent called TruNinja. Think Ninja Warrior from the T.V meets soft play! It was fab! After an initial wobble (nerves I think - and the fact I had to watch from the outside as I had R with me), S had a really great time, showing off his ninja moves and throwing himself into sponge pits! They were all treated to a hot lunch and ice cream from the birthday boy -they had all worked up quite an appetite!
Both children fell asleep on the way home, meaning that poor Uncle who was babysitting for us that night had the pleasure of two wide awake children until we got home from our meal out with family at 10pm! Hehe. Oops!

Sunday was just your average day. A bit of breakfast out as a family and then a trip to the supermarket! I visited the children's Nan with them later on to drop off her birthday present and generally disturb their peace for a bit!

So there you go - another week of fun, and not too much money spent! Can I keep this up for another 3 weeks?! Let's see...

What kind of things have you enjoyed this week? Do you have any favourite places or things to do when you're on a budget? I'd love to know!

Finding joy in the little things: As you may know, I like to look back and think about the little things in life that made us happy. There is joy to be found in every day if you look hard enough! One thing that made me smile this week was the fact that S really enjoyed the messy play activities when he used to avoid them like the plague! I think being in Reception class for a year has really helped him in this area - he wasn't afraid to get his hands covered in paint, or get sticky fingers after playing with the homemade play dough. I think we've finally turned a corner!

Did you miss what we got up to during week 2? Find it here - Summer Holiday Diaries: Week 2 - Coffee Mornings, Cooking and Cake!

I’m also taking part in the Mummy Monday linky with Becca from Becca Blogs It Out
By Kids, Cuddles and Muddy Puddles - August 16, 2018
Email ThisBlogThis!Share to TwitterShare to FacebookShare to Pinterest
Labels: Activities, Days Out, Diary Ramblings, Family Life, Ideal For Children, Libraries, On A Budget, Our Local Area, Outdoors, Summer Holiday Diaries, Summer On A Shoestring, Things To Do In Staffordshire