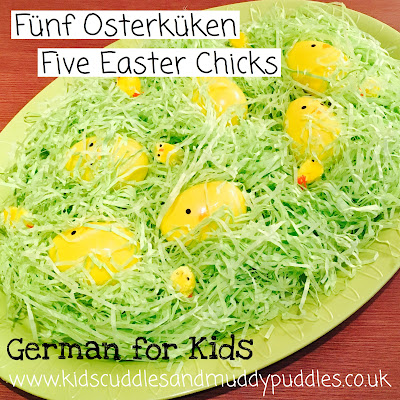 Counting to 5: numbers in practice!

The aim of today's lesson was to get the children to practise using German numbers 1 - 5 for a purpose - counting!

It is always important to recap any prior learning before introducing anything new; this promotes confidence and helps them to retain information. For our first lesson earlier this month, I decided to introduce the children to German through one of their favorite songs, Five Little Ducks. We used the song to learn numbers 1 to 5. To refresh the children's memories, we listened to the song again and we held up the correct amount of fingers everytime we heard a number. For ideas on how to introduce numbers 1 - 5, read our post called German for Kids: Fünf kleine Entchen - Five little ducks. We then counted up to 5 together and checked their pronunciation of each word. I encouraged Stanley to count back from five too, and he did it with a little help.

Next, I introduced the children to the multisensory tray. It was Easter Sunday so naturally I went with the Easter theme to engage them! I used shredded green tissue paper as the grass, yellow eggs with chick faces and those traditionally little fluffy chicks you glue (usually unsuccessfully!) to Easter bonnets. 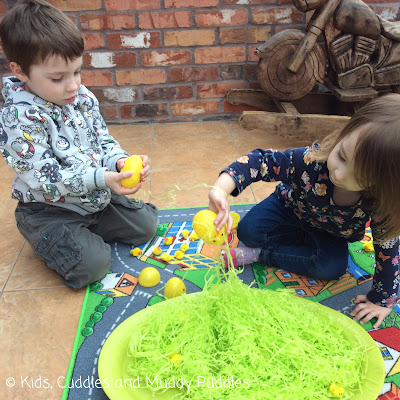 I told the kids the Easter chicks (die Osterküken) were hiding in the eggs and they had to open each one in turn, and count out the chicks in German. They responded well to me giving some instructions in the target language, using the sandwiching technique to aid understanding. (Sandwiching is when you say the words in the target language, repeat them in English, then say them in target language again.) You can find the vocabulary I used at the end of this post.

I wanted the children to use the number vocabulary for a purpose, not to just learn words by rote with no meaning to them. So I challenged them to find me eggs containing certain amounts of chicks! 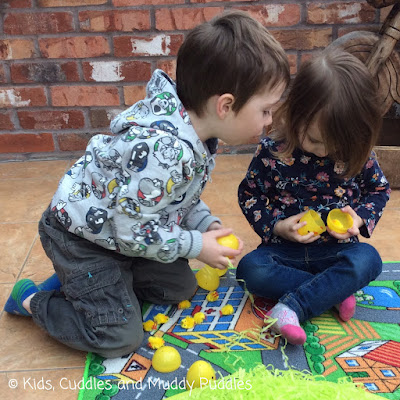 Again using sandwiching to begin with (you can eventually stop repeating the  phrase in the first language as they begin to understand the meaning), I said, "Finde ein Küken," "Finde zwei Küken," until we had found and counted each number of chicks to five. As with any learning, you can adapt the difficulty to suit the abilities of each of your children. I gave Rosie the lower numbers to find as she is only 2 and also learning to count in her own language! Stanley did really well and found and counted each number to 5, so we went a little further and counted to 10 together. 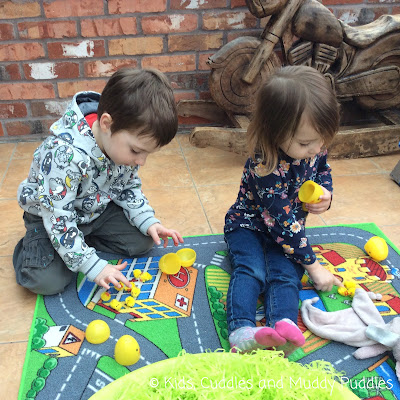 Chicks in the grass!

To push them a little further while they were still happy and engaged, I asked them to hide all the little chicks in the grass. They really enjoyed rustling the tissue paper and pulling it apart to hide the chicks! I told them I'd ask them to find a certain number of chicks and they could race to see who could find that many first. I used a simple phrase, "Kannst du zwei Osterküken finden?" I just changed the number each time. This became quite competitive and a few of the little chicks suffered unfortunate beheadings!! But they enjoyed it and really tried hard to count out loud in German! I helped Rosie a bit here as she naturally counted in English but with the speed of the activity and her age, that was totally fine and to be expected. 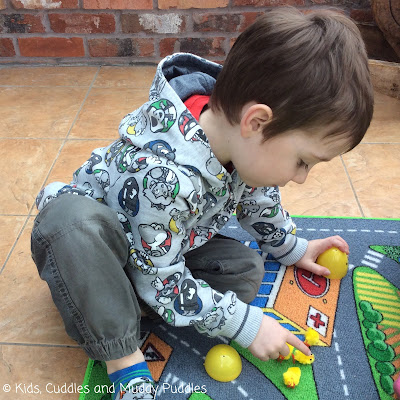 A picture to finish

To calm the kids down after the competitive activity, I gave them a colouring sheet to do. I adapted a picture I found here by adding the words Happy Easter, the Easter chick and the Easter bunny in German. I read them out and pointed to the pictures, and the children repeated them a few times. To increase shoulder stability and upper torso strength (great for helping with early handwriting), I encouraged the children to colour in whilst laying on their bellies and propping themselves up on their elbows. They thought that was fun! 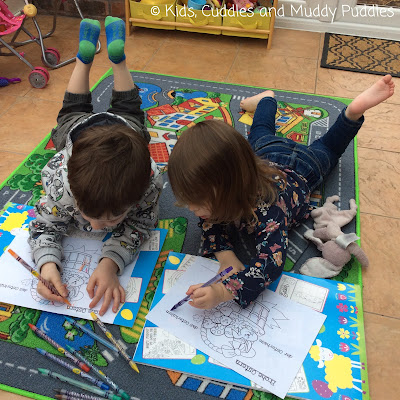 Finding joy in the little things: We are still very new to this language learning malarkey but I am so proud of how much the children are enjoying doing something new. Stanley is really soaking up the language and growing in confidence, as he frequently helped Rosie to count her chicks...even when she could do it by herself! This shows me how much he really wants to practise what he has learnt. I've never taught languages to anyone so young, but Rosie is amazing me too with her growing concentration span and memory for the vocabulary. I am proud of my kids every day, but having them join in so willingly with something I am teaching them makes me a very happy Mummy! Here's a little video of Stanley in action!